On 12 October RIFTers attended the Rally 4 Our Rights in London.

On a grey, wet day three of our admin made speeches at two location of the rally. We spoke about our 3 years in limbo, our fears for the future for our children and our admiration for those who have campaigned tirelessly for Remain. We took along our Europeans United Banner which included the names of over 900 RIFTers who couldn't attend the rally.

We also had the pleasure of meeting Sue Wilson who is the Chair of our partner group Bremain in Spain.

Here are the transcripts of our speeches 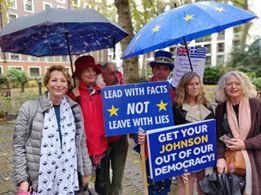 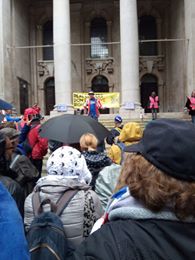 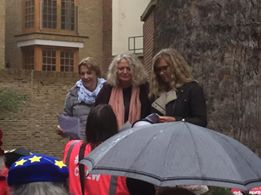 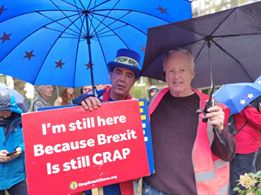 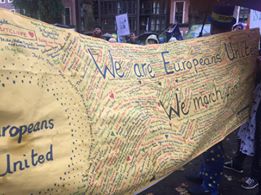 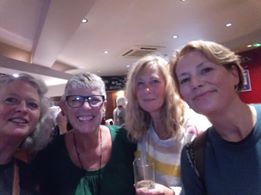 (Introduction of all 3 speakers and RIFT)

Just over three years ago the UK had a referendum whereby 17.4 m people voted to leave the European Union. Wow…3 years ago. Doesn’t time fly? It’s an often quoted phrase. We all say it. But has the time really flown by in the last 3 years? When you stop and think about it, a lot can happen In 2016 you might have just started University, and just this year graduated with a good degree, starting out on the first step of your career. In 2016 you might have found the perfect job, met the love of your life, or bought your first home. Maybe you’ve had a baby together or planning one. In 2016 you might have been working towards retirement and planning your next steps to

your new life of work-free days; maybe you’ve been looking to move to France, Spain or Italy. You might already have bought your dream home in the sun. So when you look back at the past three years, you will realise that actually it is a long time, a long time for millions of people already living in host countries to have daily concerns about their future and loss of their rights: stressed out about their income and whether it’ll meet new minimum levels; worried sick – quite literally – over doubts whether they can afford healthcare when the UK exits; panicked about their children's’ futures – some of whom have never lived in the United Kingdom. Millions of people, millions of worries. All due to Brexit. That’s why RIFT was created, directly after the referendum in June 2016. We want to Remain Together in France, and every day we as volunteers help to support and provide up to date information to thousands of UK citizens who chose France as their host country, so that they can worry a little less about their futures.

I used to have a recurring dream, I was sat on the roof of the tallest building imaginable. The firemen are below, but their ladders are too short to reach me. Helicopters above, but

it’s too windy to rescue me. And I’m clinging on for dear life… I had the same dream, regularly, for years. But one night, about 10 years ago, I had this dream for the last time. Same scenario… roof…firemen…helicopters… me hanging on… But then I realised, in my dream, that my youngest son who was very ill at the time, was clinging on to my back.

But now, I find myself in the same position in real life.

I live in France, and at the moment I’m clinging to that roof, and I need to get my children, however big they are now, back on to solid ground. Because 3 years ago in France, there were children making life choices, exercising their right to free movement by attending university, or working in different European countries, or living and studying or working from their family home in France. But as young adults now, they are being told that after the age of 21, they have lost their right to permanent residence despite having lived there for longer than the required number of years meant to qualify for those permanent residence rights. They will struggle to obtain temporary residency cards in a country where U.K. citizens will no longer have an automatic right of employment. If it all goes wrong, where are they meant to go? Their families and friends, their support system, their childhood home is all in France.

When Priti Patel said that her special responsibility as Home Secretary was to end the free movement of people once and for all, it was a full on attack on the support and stability of family life. But she said that, forgetting that our special responsibilities as parents, sons, daughters, partners, friends.. is to keep our family units together, safe and sound on solid ground…

To do that, we must Stop Brexit!

Thank you for this opportunity to speak. I voted remain, but prior to the referendum I didn’t campaign, I just knew I was going to vote remain. On the morning after the referendum I was devastated, I went to work and I sought comfort from those who like me were bereft because of the result. Sometime during the day I heard, via Facebook or twitter, of a woman who was planning a pro-EU protest that evening outside Exeter Guildhall. So at the allotted time, I walked down there from my office. There were only about 3 or 4 people there, so I walked past and around the block for a bit. When I came back round there were still no more than a dozen people, so to my shame, I walked past and went home.

As time has gone on and I’ve become more involved in all this I’ve thought about that woman and the 100s, perhaps 1000s like her who did not feel defeated like I did. Who did not give up and walk away, but instead decided to act! And I’ve thought about how those people kept going, how the grassroots remain campaign began. How those people brought more and more people along with them, how they scooped us up and pulled us along so the remain movement grew to what it is today.

August and thank you to those who protested across Europe the following weekend.

And thank you to all of you here today, because without all this, without the pressure,without our MPs knowing how we feel, I’m sure our parliament would have capitulated, and we’d have left the EU already.

RIFT sounds the alarm bell for Brexit British in France